Organic eggs from Arosa for breakfast

The best days start with a great breakfast. And good eggs are simply a staple of a good breakfast. HansAndrea Patt from Castiel – one of the last villages of the municipality of Arosa – supplies us with wonderful organic eggs on a weekly basis. Some large, some small, some light, some dark and all delicious. Our laying hens thank us for their stress-free, freerange lifestyle free from chemical-synthetic additives with top-quality healthy eggs.

Cheese from our neighbours

Sometimes you can smell a delicate waft of cheese here at Hof Maran if the wind’s blowing the right direction.

The Alpine dairy belongs to the civil community of Chur and buys milk, sometimes via a “pipeline”, from the four cattle Alps Maran, Prätsch, Sattel and Carmenna.

Hundreds of herb varieties, luscious meadow pastures, wonderful air and crystal-clear water make the milk, cheese and butter so deliciously tasty and healthy. Alpine cheese is only produced in summer – when the cows on the Alp are on holiday. 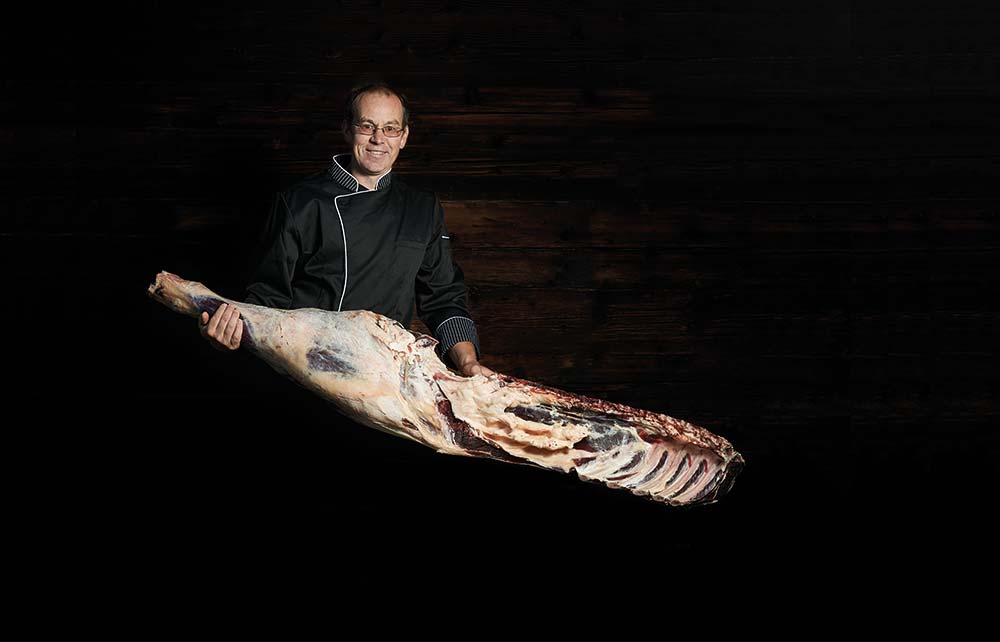 For the love of animals

You can’t miss the Sprechers’ farm on arrival in Arosa by car. One flying visit is all it takes to see that this Alpine farming couple’s priority is their close connection to the animals. Natural livestock breeding and stress-free slaughter on-site are important to them. Thanks to local processing and direct distribution, the Sprechers can connect to their customers on a personal level and have peace of mind that they are delivering meat of outstanding quality. In the winter months, they use time-honoured traditional methods to produce raw sausages and dried meat specialities. Their ancestral vocations, her a chef and he a butcher, suit them very well in this respect.

Bio Natura Beef comes from 10-month-old calves that graze on the Alpine meadows in summer before being fed with only milk and hay in an open group pen in winter – no growth-enhancing additives. The calves stay with their mother until slaughter.

You don’t need to go to burgundy to find a great pinot noir. The winegrowers of graubünden have upgraded and made quality the number one priority at their small vineyards. Reduced yields, manual vine and soil maintenance, eco-friendly vineyard cultivation, modern vinification in cellars and growing typical regional grape varieties are a matter of course for many winegrowers in graubünden.

Annatina Pelizzatti has had a strong connection to winegrowing ever since she was a child and now runs a vineyard spanning four hectares. Her unconventional wines are very distinctive and anything but mainstream. Her red wines captivate with their elegance and spiciness. Her white wines are fresh with a pleasant but pronounced acidity. Our secret tip: Annatina Pelizzatti has been working on a small wooden cask blend of Pinot noir, Syrah and Merlot for a few years. The Sorso is a complex wine with a unique spiciness and notes of dark fruits. 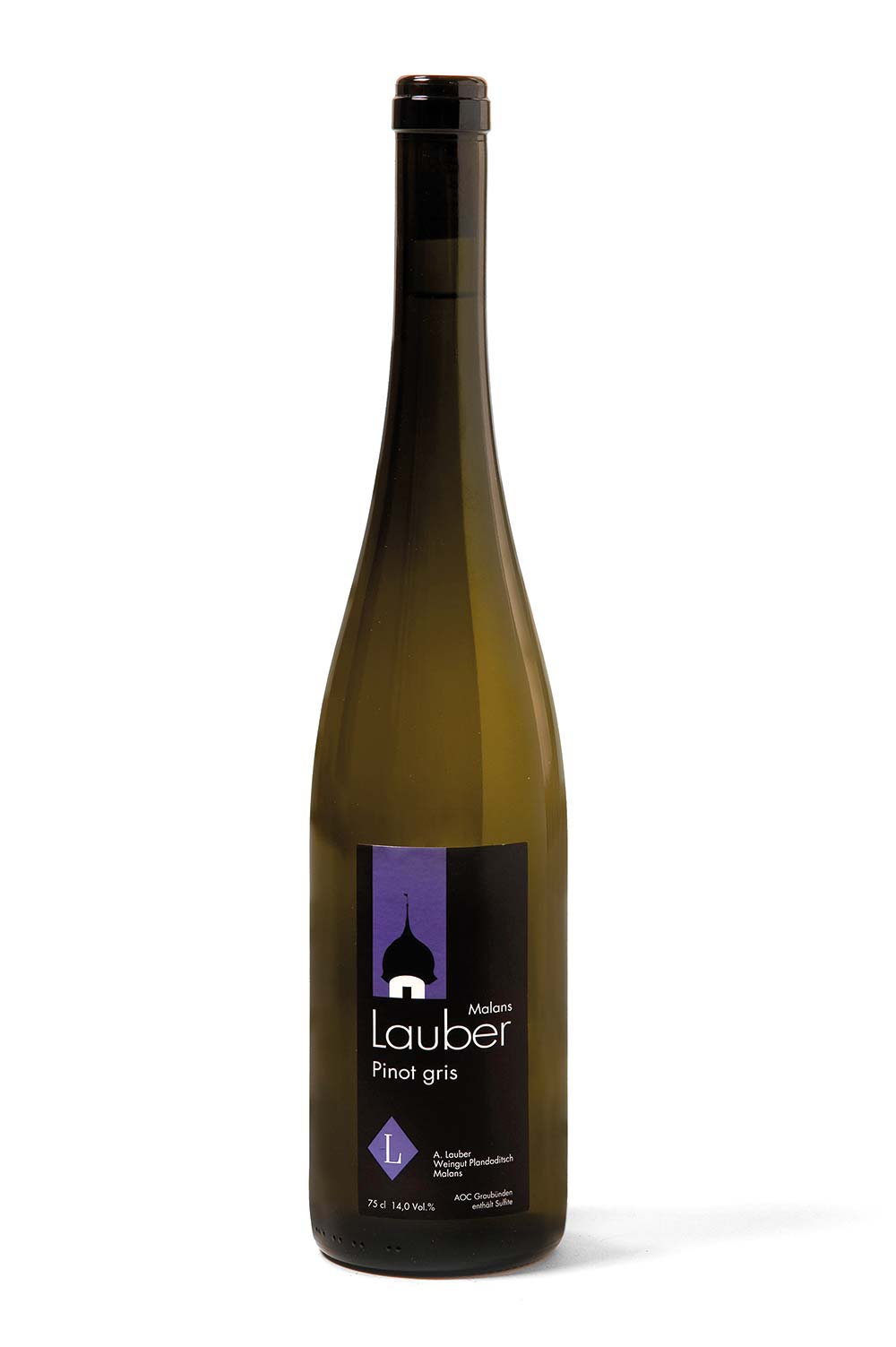 The vineyard and quality fruit business Gut Plandaditsch has been in the Lauber family since 1928. Grandfather Ernst Lauber, an industrious fruit grower and winemaker, was one of the first to specialise in the white wines Pinot gris and Freisamer. Nowadays, the Laubers grow a range of different grape varieties across four hectares and press six white wines and three red wines. Our secret tip: the Lauber Pinot gris is one of the best Pinot gris in the region – and has been for a long time. The Laubers always succeed in giving their wine an abundance of substance and body and a wonderful balance of sweetness and acidity. Our unconventionally elegant choice when it comes to Pinot gris. 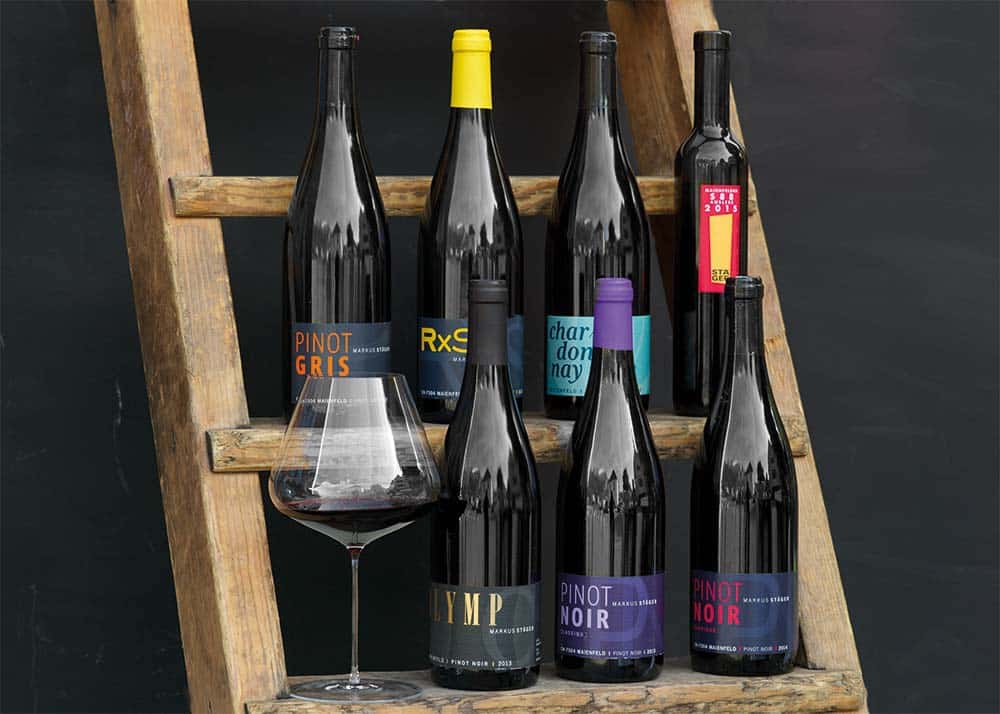 In harmony with nature

Anyone who knows Markus Stäger can tell you he’s a man of few words. He prefers to let his wines speak for themselves and that they most certainly do. Markus Stäger and his family work their vineyards in harmony with nature. They produce wines typical of the location taking into consideration terroir conditions like soil, climate and weather. And all by hand – in the vineyard and in the cellar. Our secret tip: S88, produced by Markus Stäger, is an exciting sweet wine with fruity, floral notes and a wonderful acidity. Incidentally, S88 refers to the code of the grape variety Scheurebe, a hybrid produced in 1916 by the crossing of Riesling and Bukettraube (Bouquet Blanc). 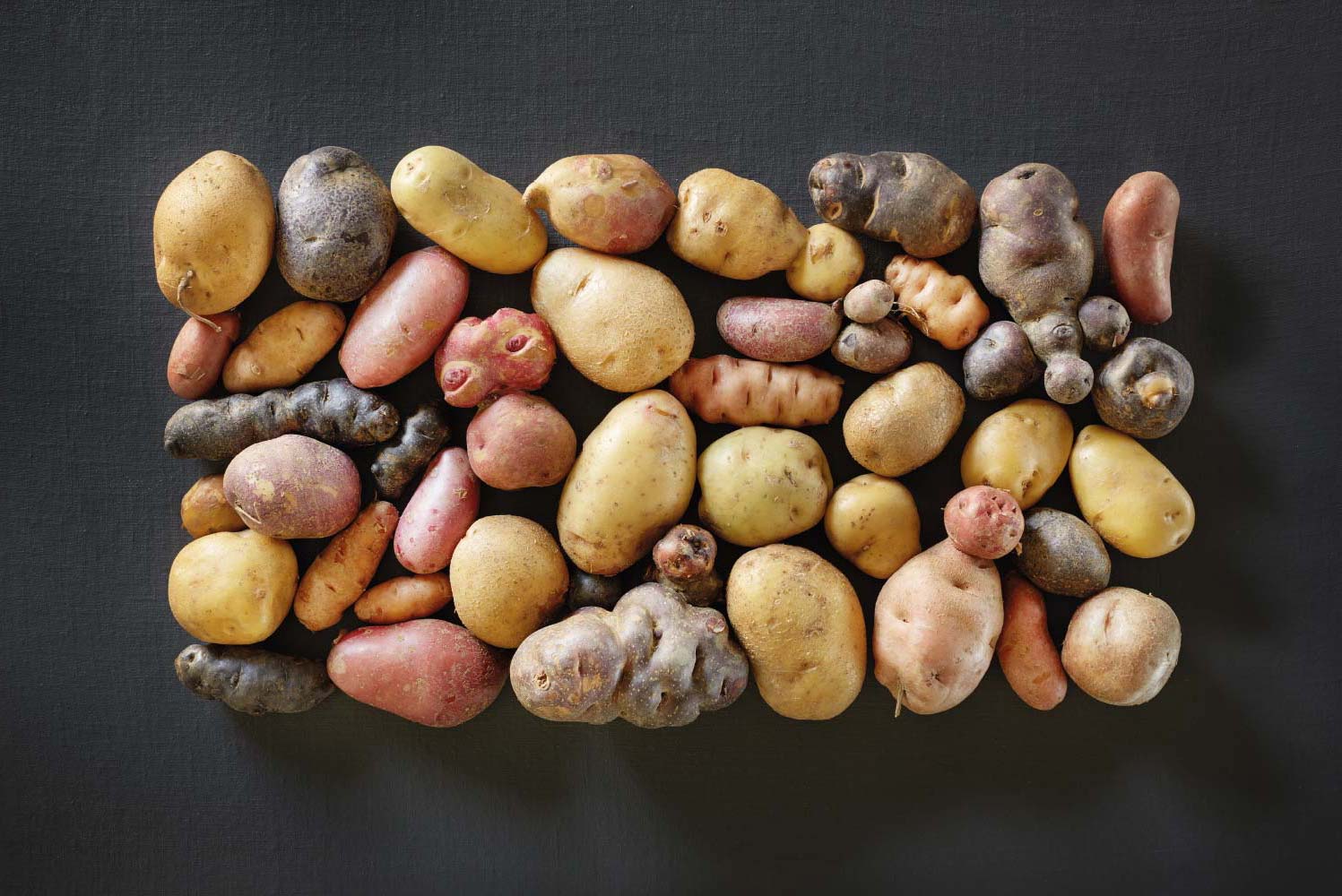 Because they couldn’t make a living from growing standard commercial potato varieties in a mountainous area, in 2003, Marcel and Sabina Heinrich Tschalèr started to grow ProSpecieRara potatoes on a plot 1’000 metres above sea level. Then, in 2005, after their first significant crop yield, they launched a huge pota – to farming festival, the Patati-Hoffest. In the valley by chance, former top chef Freddy Christandl got wind of their idea. He went, ate – and drove back home with a few bags of these crazy potatoes. He was really excited, and the guests who came to the restaurant where he cooked with the mountain potatoes were delighted.

Soon the potato crop yields at the farm Las Sorts were greater than the demand from customers in the region. Marcel Heinrich started looking for ways to get this unique product onto the plates of interested chefs and potato-lovers throughout Switzerland.

When Freddy Christandl found out about Bergkartoffeln (mountain potatoes), he knew that this delicacy was too special to be sold as a mass market potato. He had just started his own business, combining his passion for cooking with an apprenticeship as an experience consultant. On a whim, he decided to take a portion of the Heinrichs’ harvest off their hands. Initially, the spuds were transported from the farm Las Sorts to Freddy‘s garage in Schindellegi by cattle truck and from there to the customer using his car.

The farmers and chef decided to continue working together after that. Together, they gradually got the project Bergkartoffeln aus dem Albulatal (“Mountain potatoes from the Albula valley”) on its feet. Thanks to his contacts from the restaurant scene, Freddy quickly found buyers throughout Switzerland – not least because he wanted to impress sophisticated high-end chefs with his culinary knowledge.

“Mountain potatoes from the Albula valley” is now an innovative project, worlds away from the mainstream and engineered processes. Marcel and Sabina Heinrich Tschalèr can now concentrate fully on the growing process while Freddy Christandl ensures that the spuds reach plates across Switzerland – using a fair and sustainable approach. After all – even in Switzerland – fair prices for farmers form an important basis for outstanding products and innovation.

To preserve the old varieties and knowledge of mountain arable farming for future generations, the duo have partnered up with Patrick Honauer and some top chefs and experts to found the Kartoffelakademie (potato academy) and have set up a support fund for it, which is now accepting voluntary donations.

Almost every variety has its own character, its own taste and often its own texture too. 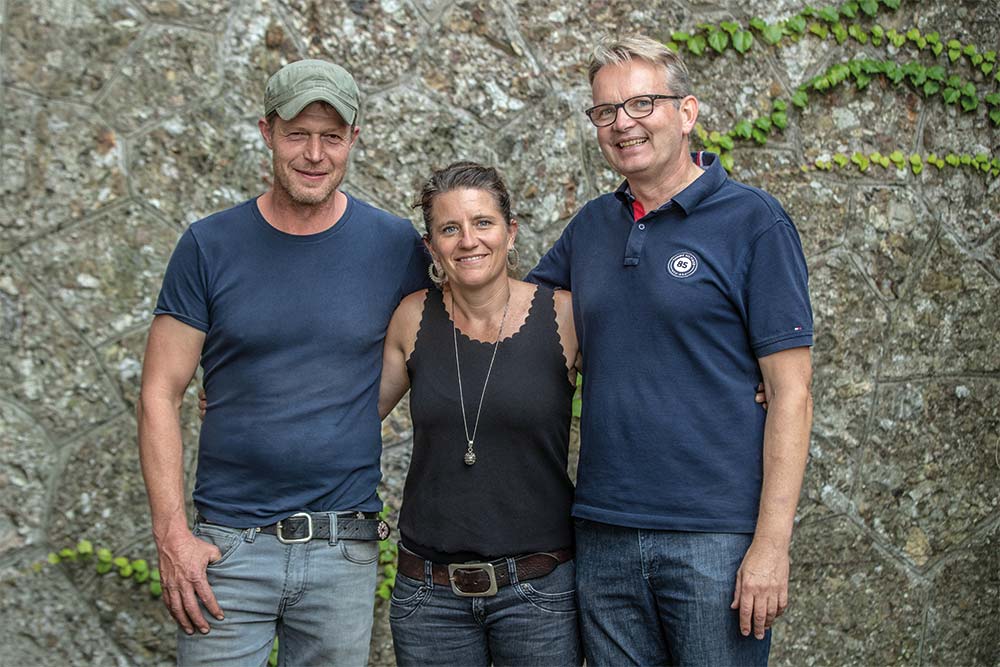 Former chef Freddy Christandl has made a name for himself in Switzerland as an experience consultant using his specialist expertise and (life) experience. He discovered Marcel and Sabina Heinrich Tschalèr’s mountain potatoes in the Albula valley in 2005. These particularly aromatic varieties are never far from his mind – and he also now dedicates his time to the Kartoffelakademie. The academy was conceived as an opportunity for producers, chefs and consumers to share specialist expertise.

The academy has three primary focuses:

The preservation of varieties: “Connoisseurs, agron – omists and chefs don’t always have the same interests when it comes to this,” explains Christandl.